I started trying to get pregnant with my second baby right after my first daughters 1st Birthday! I wanted to have kids close in age. By the time her second birthday rolled around, it hit me, that we had now been trying for a year. It felt like it had been longer, and it made me sad for those that I know who have been trying for much longer, and it made me have a small sense of understanding.  Suddenly this pain existed whenever I thought of having another baby. The doubt sets in quick and every month that you are not pregnant, it starts to sting a little bit more. We tried for another year or so.

This struggle fortunately came to an end when we found out we were pregnant! We finally decided to reach out to our doctors and schedule that initial infertility appointment. Possibly the relief of making that appointment helped to ease my stress, because we never had to go and we instead were able to call and change it to an initial ultrasound. 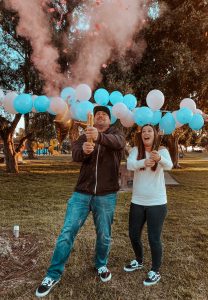 After weeks of rough first trimester symptoms, I had finally made it to 14 weeks. We were so eager to know the gender. My friends wanted to plan a gender reveal party and be the ones to tell us. They threw us the cutest little soiree in the park, we blasted the confetti blasters, we cried and hugged and cheered about the pink confetti, and we beamed ear to ear, excited that we could now say she, and start to plan out every detail of our baby girl’s life! We were on cloud nine. My good friend Carley had driven down from LA to make it, I spent the evening laughing and munching on sweet treats, and soaking in the fact that I now knew I was pregnant with a baby girl. The party had ended, and we were back at home, just down the street. Carley was with us, staying the night so she didn’t have to drive back to LA that night. It had already been such an eventful day, and we were so ready to eat some more dinner, chat and get caught up with an old friend, and relax!

Jordan is cooking something on the grill, Carley is hopping in the shower, I have just put Carli to bed- next thing I know I’m stopped in my tracks, in shock, starring down at a toilet full of blood. I was in shock and didn’t know what to do, I stood there, almost light headed, feeling like I couldn’t get the words out to say it out loud to make it be real. And to be honest, I didn’t know what was happening, and I thought of the worst-case scenario. I felt like I was miscarrying and I didn’t know what to do.

I had immediately put a pad on after I noticed a large amount of blood in the toilet. By the time I had gotten to my room, I could tell that it was almost full. I could tell I was hemorrhaging. I ended up saturating multiple thick maxi pads before even leaving my house. After calling my husband in for help, and Carley, we called the nurse line and she advised me to head to the emergency room ASAP. Fortunately, with Carley staying at our house, we didn’t need to call for a sitter, we could just head right out the door and know that our 2 year old, Carli, who was already asleep in her crib, was going to be safe at home.

After first attempting to go to Tri-City ER, and finding out they had no beds and a 9 hour wait, my husband rushed me out of there and we went to Scripps ER in Encinitas, and were luckily able to get right in because at this point, I had lost a lot of blood and was very light headed.

As I sat in the wheel chair in the ER waiting room, Jordan over my shoulder’s waiting to push me in to the room that was becoming available for triage, I started receiving Facebook and Instagram notifications. I had forgotten that I had just finished up posting the pictures and revealing that I was pregnant with a baby girl on social media. I started receiving the sweetest congratulation messages from friends and family, congratulating me on my wonderful news, while I’m sitting in a wheel chair, with blood covering my leggings, feeling like I’m about to receive the worst news of my life. 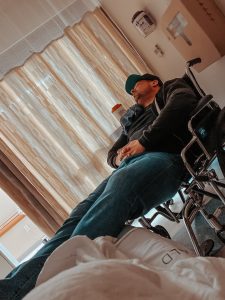 Spoiler alert, this is a happy ending. No trigger warning needed. I thank all of my lucky starts every day for that. This was a traumatizing event, it was scary and it was only the start of a very complicated pregnancy for me- but the silver lining for sure is that this hematoma did not result in a miscarriage for me. I do personally know others whose stories ended up differently, so I do not take that for granted. I still wanted to tell my story, because finding posts as specific as this one to read while I was going through this really helped me. I figured there was a chance that my story might do the same. I finally made it to an Ultrasound, 4-5 hours after I started bleeding. Which although we were stressed about at the time, and it seemed like an eternity, considering the wait times at surrounding Emergency Rooms, I am grateful I was able to be seen at all! We were told that there was a heartbeat! I was so relieved and so grateful but also so confused. So- what does this mean? Why am I bleeding? Is that normal or is something still wrong? None of those questions, were answered. Jordan wasn’t even allowed in the room. It was for sure a more efficient, Emergency Ultrasound, not a slow paced, involve the other parent, and giggle at the cute baby pics, kind of ultrasound- it was serious!

Back in the room, after radiologists were able to look at my scans, we were told it was a large-sub-chorionic hematoma. I was advised to stay on bed rest and follow up with my OB in a week. From there she advised me to stay on bedrest until further notice.

Disclaimer: I am not a doctor, and this is not medical advice nor is it cited information.

This is how the sub-chorionic hematoma was explained to me in laymen’s terms: I was told that when you give birth, and bleed post-partum, that is because after you deliver the placenta you have a wound that needs to heal. Well my placenta dethatched prematurely but reattached. Therefore, I did not have a miscarriage, but the area that the placenta was initially attached to begin to pool with blood. Eventually, when it became too full – I began to hemorrhage. The reason that they recommend bed rest is because now that they are aware of this placenta issue, they worry about if the new placenta attachment is strong, or if more bleeding will occur. There is also an issue that can occur when the placenta is too close to the vagina and you may bleed throughout the pregnancy. This is a separate pregnancy condition called placenta previa but for a while, the ultra sound technicians were worried about this for me as well. After consistent ultrasounds to monitor this, eventually the hematoma had shrunk and couldn’t even be found on an ultrasound. This was great news and I was told I could ease off of bed rest and start to take short walks and lift my toddler again! This doctor visit ironically fell on March 20. Which coincided with the date that California entered lockdown for the COVID pandemic! So, right when bed rest ended – world quarantine began! Yes.. this was a very interesting pregnancy!! 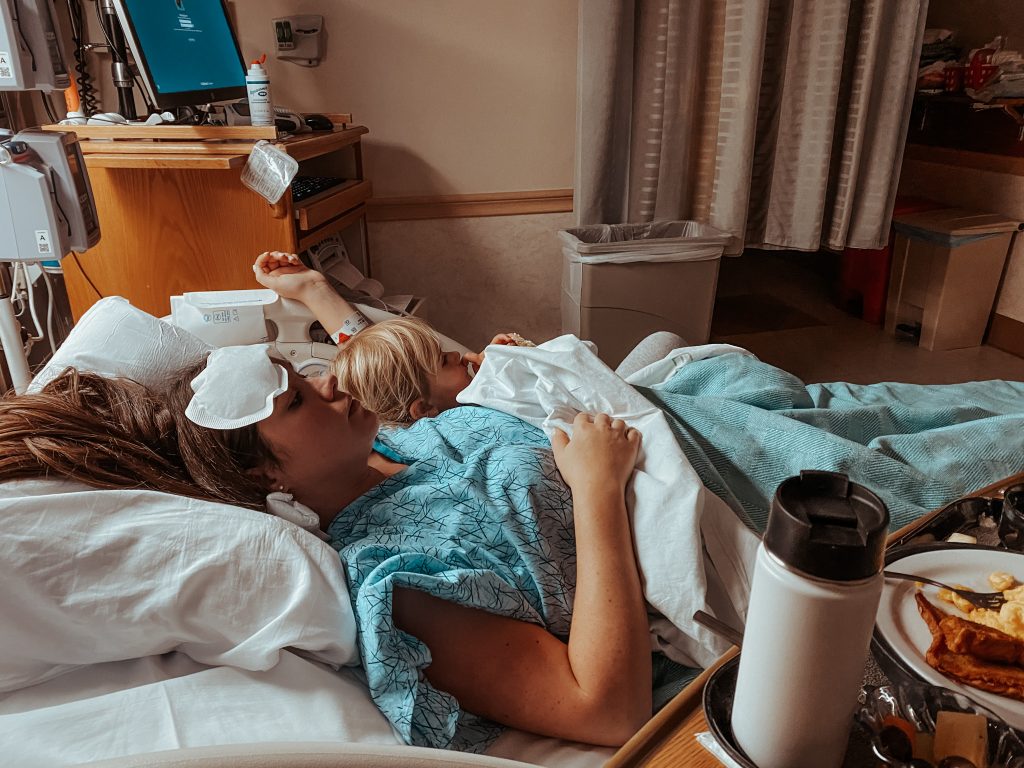 I was really not feeling well in this picture and that was due mainly to the fact that being in the hospital and not eating for so many hours. I got low blood sugar mixed with morning sickness. 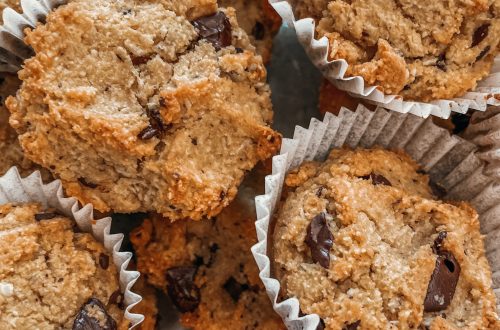 What Happened When I Gave Plant Paradox a Try…

I'm a wife and stay at beach mom to two girls. Here is where I share stories, nursery and playroom decor, toddler meal ideas and more. Thanks for visiting! 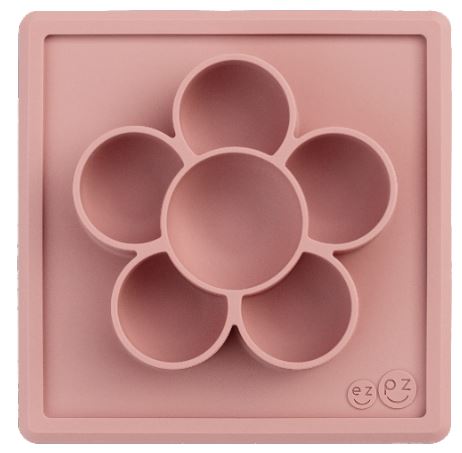 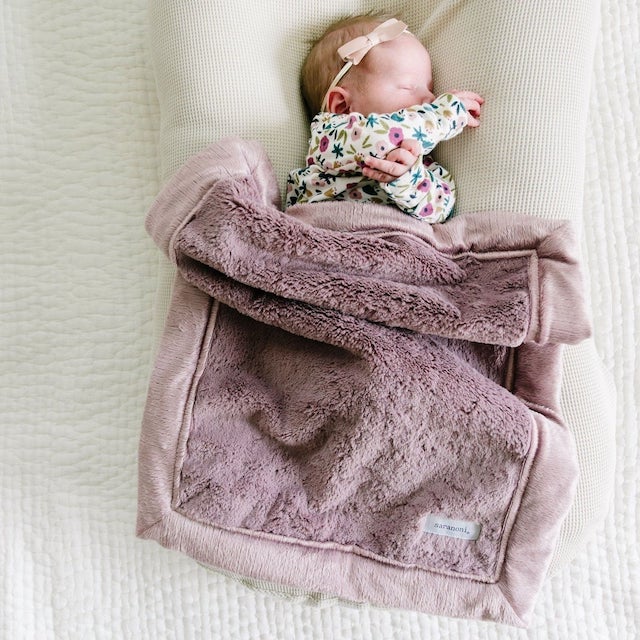 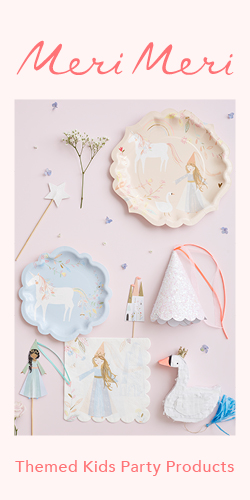